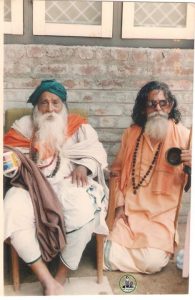 On the 1st of September, 1984, I was in Tiruvannamalai. Sitting in the small shop of one of my friends, I enquired him about Yogi Ramsuratkumar. “Oh! You mean that ‘Visiri Swami’ (Swami with a country hand-fan)?”, he asked. “Yes, I want to see him”, I replied.
My friend, though a close neighbour to the Swamiji, had little personal acquaintance with him, yet he took me to the Swamiji’s ashram very close to the Arunachaleswara Temple and introduced himself and me to the Yogi. To his utter surprise, the Yogi replied to him: “Yes, I have to talk many things to the Professor. You may leave him here and go.” My friend was amazed. Before he could understand what was happening, the Yogi led me into his abode and closed the door from within, leaving my perplexed friend outside.
The Yogi took me to a hall inside the house. It looked more like a dumping ground where all the garbage of the town was accumulated. I found old books, newspapers, letters, cigarette butts, burnt matchsticks, empty matchboxes and cigarette packets littered everywhere. The floor had perhaps not seen the touch of a broomstick for months together. There were bundles wrapped in rags by the sides of the walls, some old aluminium vessels, a number of pictures of the Yogi hanging on the walls and a number of withered garlands. To my utter surprise, I could find even currency notes of higher denominations and coins littered around the torn mat, which the Yogi used to sit. He made me sit on another torn, old mat opposite to him. For some time he was gazing at me without asking anything. On my part, I was too dazed to be in the presence of such a strange person whom I could not judge at once whether he was a mad old beggar or great saint or god man. I was silently sitting in front of him looking at his strange form, which was apparently nauseating, but drawing out my heart from within by the force of inexplicable attraction. “This beggar has the bad habit of smoking, please bear with me” – so saying the Yogi started his conversation. He took a cigarette, placed it between his lips and lighted it. The he looked again at me and asked: “What made you come to this beggar, Professor?”……