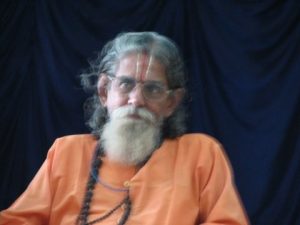 Sadhu Rangarajan visited South Africa for the first time in 1984 to edit the YOGA LESSONS FOR CHILDREN, a prestigious publication of the Divine Life Society of South Africa, on the occasion of Swami Sivananda Centenary. He addressed the World Hindu Conference at Durban in South Africa in 1995. Subsequently he has set up the branches of the Academy in the country and has made twelve more visits. His last successful tour of South Africa for Hindu Dharma Prachar was in 2014 and he is visiting again from 21 March 2018 to 17 June 2018.  He has also visited Mauritius, Reunion, Botswana, Kenya, Singapore and Nepal carrying the message and mission of Mother Bharat to Her children in those distant lands and set up branches of the Academy in Singapore, Kenya and Botswana. Sadhu Rangarajan is also a member of the International Coordination Council of Vishwa Hindu Parishad Overseas and participant in the Vishwa Dharma Prasar Yaatra of sadhus and sants to different countries. Lauding the work of Sadhu Rangarajan abroad, his Shiksha Guru, H.H. Swami Chinmayananda, said “We need such champions of Hinduism, who scream into the ears of the sleeping Hindus, reviving and revitalizing in their hearty consciousness of their proud past.”

Sadhu Prof. V. Rangarajan received initiation from his Deeksha Guru, H.H. Yogi Ramsuratkumar Godchild Tiruvannamalai, on April 26, 1988.  Since then he has been traveling all over the country and abroad, propagating the Ramanama Taraka Mantra in accordance to the command of his Master.  Sadhuji made his twelfth visit to South Africa on his Dharma Prachar Yatra in 2014.

H.H. SWAMI CHIDANANDA, World President, Divine Life Society, Rishikesh, in his speech, following, Sadhu Rangarajan’s address in Swargashram, Rishikesh, on October 26, 1987, spoke about Sadhu and said: “I will take this opportunity for saying a few worlds about Professor V. Rangarajan.  He has shared his lofty ideas and inspiring thoughts with us all in a very very dynamic and thrilling manner.  You all know, ‘Brahmavit brahmaiva bhavati‘ – ‘Knower of Brahman becomes Brahman’, and you also know: ‘As a man thinketh so he becometh’. Constantly thinking about Swami Vivekanandaji, constantly thinking about such noble patriotic souls like Bankim Chandra Chatterjee, Aurobindo Ghosh and Subramanya Bharatiyar, who saw in India a veritable Divine Shakti, a veritable deity, not merely a land, not merely a nation, but a living force of all our hearts, a dynamic, a potential force to transform humanity into divinity – thus, in their inner intuitive vision they beheld the eternal, living reality, the true saviour, Bharatvarsha, and the redeemer if not today at least tomorrow of the future of mankind; they adored, they eulogized in their intuitive vision their spiritual identity of their self with the soul of India, Bharata Shakti – and Professor V. Rangarajan, who is amongst us, in constantly thinking about these lofty souls, their sublime ideas and their inner spiritual intuition of their Divine Mother, beloved Motherland, Matrubhoomi, Bharatvarsha, he has imbibed verily their fervour – their patriotic fervor – and love for India, and the great spirit of adoration of India so that when he speaks, their own words come through him.  Constantly thinking of Vivekananda, he has himself become an inspired orator.”